How many beaches in one day?

We hired a little Fiat 500. Chalk that up as 1 - 0 to Jo as my quad bike suggestion fell by the wayside. Car packed with all sorts to cover every conceivable outcome and eventuality the day could throw at us, off we set armed with the usual trusty fold out tourist road map with not a single useful ounce of detail on it and you can forget about anything being to scale. "Look" I said, "The map's only detailed one road". "That's because there only is one road" replied Jo. "Folegandros is only 12km long from end to end". She's right of course but how does she know these things? "They told us in the car hire place, remember?" I must admit to being slightly preoccupied when we were getting the car, thinking how much the guy serving us looked a lot like James Blunt with glasses. "Here's the keys to your Fiat 500, she's beautiful." 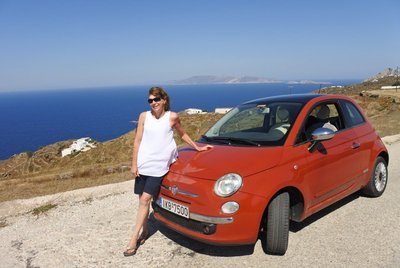 First we visited the port where we'd arrived by ferry and we checked out the beach called Vardia to the left of the port. 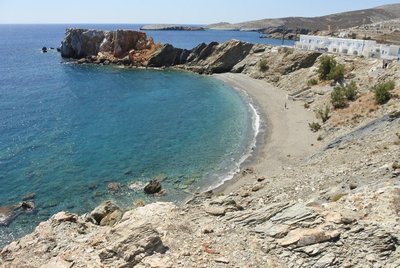 Immediately to the right of the port is chochlidia beach 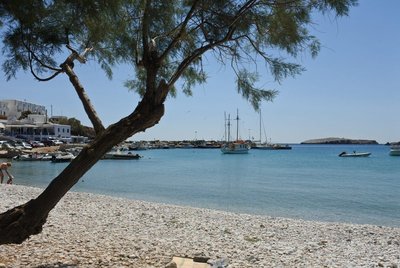 which we strolled along then climbed to observe the beaches of Latinaki, Vitsentsou and Pountaki. 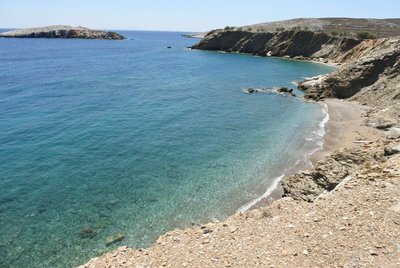 A short drive further on we arrived for a look at Livadia beach but this was not our destination. Oh no that would be too easy. Instead we drove to Livadi village - two houses, two donkeys, some goats and a dusty track. We parked up, found a good use for the useless map as we covered the steering wheel with it so I would be able to touch it with my tender hands which were still recovering from a scolding hot shower this morning!

Resembling a pack horse and Kwai Chang Caine (kung fu) - ok hands up all those old enough to remember. Both carrying various bags slung over our shoulders. Off we set down the dusty track. There was some spectacular hills and scenery all around us. 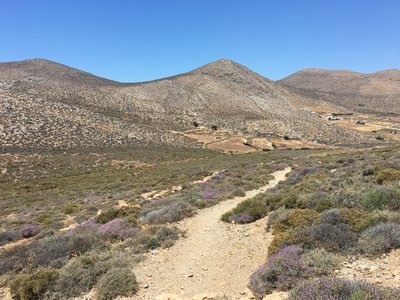 I'd abandoned flip flops in favour of trainers (Adidas Samba, light blue - classic) Sensible eh? Jo in flip flops. It's a beautiful day and a beautiful walk as we start to climb higher. We reach the peak and get our first glance over the other side. O M G! What a view. Katergo beach in all it's glory directly below us. Along way below us. A huge drop below us. 170 meters below us. How does Jo know these things? Did James Blunt tell her that as well? 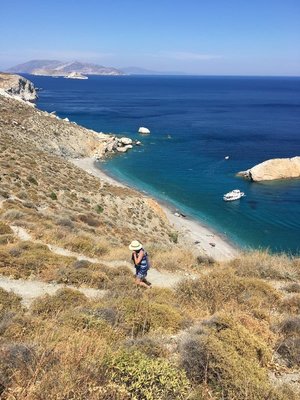 We start our decent. It's single file on a narrow path of shale and what looks like pearlescent welsh green slate - nah can't be. Sheer drops down to the beach. Jo decided flip flops are probably not the most suitable for this kind of terrain so changes into her 'dolphin shoes.' OK so there's a story- when the kids were younger we took them to Florida to swim with Dolphins and we had to wear a wet suit vest and shoes. Ever since, we've called them dolphin shoes and they're damn handy for pebbly, gritty or stoney beaches oh and of course, climbing down ruddy big hills with sheer drops. We descend slowly and carefully pausing every once in a while for more photos of the spectacular view. We continue trying to avoid those really prickly hard plants and battle swarms of tiny midge like flies. At one point the path appears to totally disappear from view over an edge and we hold an immediate and impromptu high altitude team meeting and risk assessment. It's 1 against 1 in the vote to continue or not so rock, paper scissors decides that we proceed. Our very last few meters are actually the worst and we more or less slide down on our backsides. The sight of two ill equipped 50 odd year olds in their holiday hats, dolphin shoes and adidas samba (light blue - classic) trainers, scrambling down a cliff face and trying to look nonchalant as they slide onto the beach rather more quickly than they anticipated, has probably kept those already on the beach quite entertained for the last hour or so. Those being the ones that had sensibly arrived on the beach by short boat trip (15 minutes) from the port.

We change out of our sweaty, dusty and mucky bottomed shorts etc to don our cossies and immediately immerse ourselves in the soothing and refreshing South Aegean sea - bliss. We spend a lovely afternoon there and can't help empathise with the 50 odd year old French couple following in our intrepid footsteps as we try to judge whether we handled the last few meters better than them.

We probably stayed longer than intended. The thought of doing the same journey in reverse may have played on our minds. But we did, with probably more rests and pauses on the 170 meter climb back up than the descent. On the way back to our car having absolutely thoroughly enjoyed our walk and scramble we were accompanied by a dog. A brown and white Spaniel type breed. He seemed to take a bit of a shine to us as he panted alongside us. He tried to get in our car a couple of times. We shared our water with him. When it was clear to him we weren't going to let him in our car. He left us in favour of a couple on a scooter. The next time we saw them was back at chochlidia beach and the dog was still there. So he either followed them all that way or they gave him a ride, we're not sure.

Previous Next Table of contents

Comments on this blog entry are now closed to non-Travellerspoint members. You can still leave a comment if you are a member of Travellerspoint.

If you aren't a member of Travellerspoint yet, you can join for free.